Elmer Joseph Ritter was born 1892 to Nicholas and Bertha (Luette) Ritter. He was the fourth

of six children (Henry, Edmund, Frank, Elmer Joseph, Carl, and Catherine). At the age of seventeen, Nicholas started his own business in his home on Oak Street near 13th in New Albany, Indiana, the Ritter Bakery. The front of the house served as the storefront for sales while the baking occurred in the ovens where the museum stands today.

He attended St. Mary of the Annunciation parish and grade school a few blocks away and because of the family business, he earned the name “Apple-Pie Ritter.” A desire to become a priest emerged early and upon graduation from the 8th grade he eagerly traveled to St. Meinrad Seminary for high school, college, and theological studies. He was ordained a priest on May 30, 1917 at St. Meinrad Archabbey by Bishop Joseph Chartrand if Indianapolis.

He celebrated his first Mass at his home parish. “My home and St. Mary’s were the greatest factors in my life.” Within a few weeks he was assigned assistant to St. Patrick’s Church in Indianapolis. “There was no vision, no voice from Heaven. I simply wanted to be a priest.”

Fifteen years later, while a rector of Saints Peter and Paul Church in Indianapolis, he was ordained Auxiliary Bishop on March 28, 1933, also by Bishop Joseph Chartrand. At 41 years of age he was one of the youngest in history. He became the first Archbishop of Indianapolis in 1944 and thought that he would serve there the rest of his life. At this time he changed his name from Elmer Joseph Ritter to Joseph Elmer Ritter. A year later, upon the death of his mentor Bishop Chartrand, he was appointed the seventh Bishop of Indianapolis.

His 1938 decision to end racial segregation in all Catholic schools in the diocese was met with opposition by the Ku Klux Klan as well as members of his own clergy. The KKK staged protests outside of SS. Peter and Paul Cathedral in Indianapolis and, according to family history, Ritter received death threats. By 1943, accomplished the feat in every parochial school within the Catholic Diocese of Indianapolis, a full 11 years before the Brown vs. Topeka Board of Education case in 1954.

Other significant accomplishments during his years in Indianapolis included:

Ritter was installed as the first Archbishop in Indianapolis following the elevation of the Diocese of Indianapolis to the status of an archdiocese by Pope Pius XII on October 21, 1944. His motto was “Work hard, pray hard — but don’t worry.” 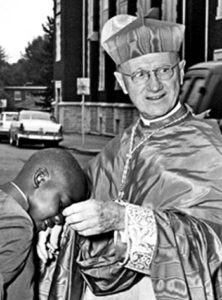 In 1946, Ritter was appointed the fourth Archbishop of St. Louis, Missouri, and immediately continued his legacy of outreach and reform.

In 1947 he announced an end to racial segregation in all Catholic schools. He declared, “The cross on top of our schools must mean something,” and he believed in “the equality of every soul before Almighty God.” Numerous Catholics threatened to sue Ritter for violation of state law. Leaders of the suit eventually dropped their grievances under threat of excommunication from the church. Ritter then desegregated all Catholic schools and hospitals in the archdiocese, years before the federal Civil Rights act. Subsequently he served as a consultant on desegregation to public school systems when it became a federal law years later. Their authorities said, “….the ease in which it happened was due to Archbishop Ritter having already lead the way.”

Additional accomplishments in St. Louis include: 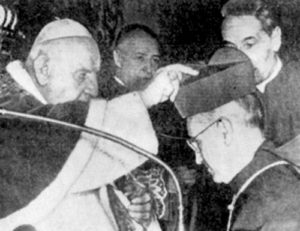 On January 16, 1961, Archbishop Joseph Ritter was elevated to the rank of Cardinal (an international bishop of the Catholic Church) by St. Pope John XXIII. To this day he remains the only Roman Catholic Cardinal native to the state of Indiana. Some of his friends during his St. Louis years included Supreme Court Justice Sherman Minton (also from New Albany) and the junior Senator from Missouri, Harry S. Truman, who we believe later as President of the United States, consulted with the Cardinal about desegregating the armed forces.

Two years earlier, a rarely held ecumenical council of the church had been called by Pope John XXIII in 1959, shocking the world with the creation of the Second Vatican Council (a.k.a., Vatican II). Such an assembly of Roman Catholic religious leaders had not been called since 1868. Cardinal Ritter was one of 2,500 bishops and church leaders called to Rome to review cultural changes following the effects of World War II and the relationship between the Roman Catholic Church and the modern world.

Ritter biographer, Monsignor Nicholas A. Schneider states, “He was a forward thinking individual who helped formulate and bring the second Vatican council’s changes into every day Catholic and liturgical celebrations.” Ritter participated in the creation of 16 documents that redefined the Catholic Church as we know it today. Vatican II is considered by many the most important Catholic event of the 20th century.

A major step into the modern world for Catholics in the United States occurred on August 25, 1964, when Cardinal Ritter was asked by the Pope to celebrate the first public Mass in America in English. More than 12,000 attended at Kiel Auditorium in St. Louis, Missouri – a direct result of the Second Vatican Council and its goal of updating the Catholic Church. Churches across the country implemented the Mass in English on November 29, 1964.

Joseph Cardinal Ritter died in St. Louis in 1967, and is interred in the Cathedral Basilica.