JOSEPH ELMER CARDINAL RITTER – His Life and Times, by Monsignor Nicholas A. Schneider, was published by Liguori Publications in 2008. On the back cover, Msgr. Schneider writes the following. 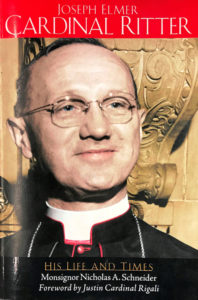 “Cardinal Ritter was one of the most important prelates of the twentieth-century American Catholic Church. Before being assigned to the Archdiocese of St. Louis, Joseph Ritter served as the ordinary for the Archdiocese of Indianapolis. He was a forward-thinking individual who helped formulate and bring the Second Vatican Council’s changes into everyday Catholic Practice and liturgical celebrations.

His many “firsts” include the desegregation of an entire diocesan school system, sending archdiocesan priests as missionaries to South America, building a diocesan hospital dedicated solely to the health care of children, and many examples of ecumenical outreach, including being the first to deliver a major address at an American Protestant seminary.

Known for his broad pastoral sensibility, Cardinal Ritter embraced the issues of ecumenism, social justice, Catholic education and Church reform. He was a truly selfless shepherd-leader.”

Joseph Elmer Cardinal Ritter – His Life And Times
by Monsignor Nicholas A Schneider.

This review is from: Joseph Elmer Cardinal Ritter: His Life and Times (Paperback)

A few years ago a friend mentioned that Cardinal Ritter is one about whom a biography should be written. Now it has. Msgr. Schneider has done an excellent job of writing a popular biography of one of the most significant churchmen of Twentieth Century America.

Cardinal Ritter was born into the humble background of a German-American family in New Albany, Indiana. After graduation from St. Meinrad’s Seminary, he entered the service of the diocese of Indianapolis where he became a protégé and eventual successor of Bishop Chartrand. Ritter was installed as Bishop of Indianapolis in 1934 and as Archbishop when Indianapolis became an Archdiocese in 1944. During his tenure in Indianapolis, Ritter got the diocese on a sound financial footing and promoted Catholic education while facing the challenges of Depression and War.

In 1946 Archbishop Ritter was called to replace the popular John Cardinal Glennon as Archbishop of St. Louis. Ritter, in contrast to his predecessor, came as a humble, physically unimpressive man with limited oratorical skills. His tenure in St. Louis was to be historic as he challenged the Archdiocese, community and the universal church in ways which could not have been foreseen. His first major initiative was to integrate the parishes and parochial and archdiocesan schools, starting in the late 1940s, when it was not even clear that such was permitted by Missouri law. It is a tribute to him and to the community that this was accomplished with so little disruption. As the 50s and early 60s progressed, Ritter established Cardinal Glennon Children’s Hospital as a memorial to his predecessor as well as numerous new parishes and high schools to serve the increasing faithful and new suburbs that were springing up. He anticipated Poe John XXIII’s call for missionaries to Latin America by setting up the Archdiocesan Mission program in Bolivia, which continues to this day.

Ritter’s service was recognized with his elevation to the College of Cardinals by Pope John in 1961. This would enhance his service to the Universal Church. During Vatican II, Ritter became a leader of the American Bishops and the one who was most responsible for the Vatican Document on Religious Freedom, which he pushed over determined European opposition. During the Council he took part in the 1963 consistory which elected Pope Paul VI.

After the Council, Cardinal Ritter devoted himself to the implementation of its decrees in St. Louis, as well as opening Ecumenical invitations to other Christian communities. He had little time to work on these issues as he died in June 1967.

Cardinal Ritter is a figure with whom anyone interested in the history of St. Louis, Indianapolis or the Church in America should be familiar. Msgr. Schneider has given us the opportunity with this short, well written and easy to read work. No reader should worry of being bogged down in minutiae. Terms are defined and there are no footnotes to slow down the reading. I hope that you enjoy it as much as I did.

Msgr. Nicholas A. Schneider, a retired parish pastor who was an author and noted liturgist, died May 5, 2020 at age 89 from complications of the COVID-19 virus.

He served the Archdiocese of St. Louis in many ways, including as a rural and city associate pastor; prison chaplain; executive secretary of the Archdiocesan Commissions on Sacred Liturgy, Music and Art; and lecturer for the Pope Paul VI Catechetical Institute. He was a founding board member of the Federation of Diocesan Liturgical Commissions and of the Missouri Liturgical Congress. 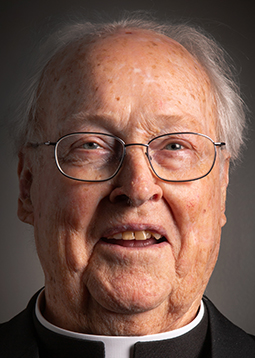 Following ordination, he served in the motor mission apostolate as assistant pastor at Sacred Heart Parish in Wilhelmina, Missouri. He was named assistant pastor of Holy Cross Parish in the Baden neighborhood of St. Louis in 1958 and pastor of All Saints Parish in University City in 1971, Our Lady of Providence in Crestwood in 1977 and St. Monica in Creve Coeur in 1985. He retired to a private residence in 2005 and moved to the Regina Cleri residence for retired priests March 31.

Msgr. Schneider was a prolific writer and authored six books and more than 30 articles for ecclesiastical journals. He moved to an apartment after retiring, he said, because it was the best setting for him to write the biographies of two cardinals who led the Archdiocese of St. Louis, Cardinals Joseph E. Ritter and John J. Carberry. He finished the work in 2009. He wrote a book in 1971 on Cardinal John J. Glennon.

Besides that work, he also assisted at various parishes by celebrating Masses. Then, for about 10 years he celebrated Mass at the Sisters of the Good Shepherd Convent and until two years ago he celebrated Mass once a week at the Carmelite nuns’ monastery. Since 1990, he’d been involved with a priest-rabbi dialogue group.

When Vatican II convened in 1962, then-Father Schneider was assistant pastor at Holy Cross Parish in St. Louis, under pastor Msgr. Martin Hellriegel, who was influential in the liturgical movement. Working with Msgr. Hellriegel “was a blessing to my priesthood,” said Msgr. Schneider, who was executive secretary of the archdiocese’s liturgy commission for 16 years and chairperson for nine years.

Msgr. Schneider was named monsignor by Pope Paul VI in 1977.

A private service for Msgr. Schneider’s immediate family was planned subject to the restrictions imposed as a result of the COVID-19 guidelines.