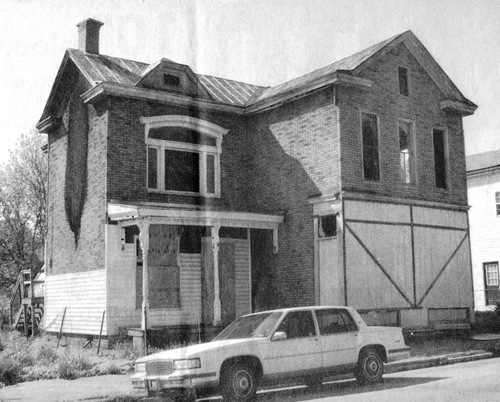 The Cardinal Ritter Birthplace Foundation, Inc. (CRBFI) was founded in 2004 and a board was established to determine a vision for what this restored house could become and how funds could be raised to accomplish this. Several decisions were made at that time.

As early as 2001, the Ritter house and bakery faced an uncertain future. Suffering from years of neglect and deferred maintenance, the late 19th century structure was condemned by the city of New Albany, and ordered demolished. This prompted Historic Landmarks of Indiana (a statewide, non-profit historic preservation organization) to purchase the property in 2002. It had been pointed out by local historian Paul Graf that the building was once Ritter’s Bakery and that Cardinal Ritter was born in the house and spent his childhood there. CRBFI members believed it was important to save the house and restore it as much to its best condition ever, keeping as many historical elements possible.

2) Become a Community Outreach Center
CRBFI wanted in some to way carry on the good work Cardinal Ritter had been involved with during his career. Members believed that opening a neighborhood center, one that housed non-profit tenants that reach out and touch of people in the S. Ellen Jones neighborhood, could be a benefit to the city and region. The volunteers were confident Cardinal Ritter himself would approve if he were on our board of directors.

3) Tell Cardinal Ritter’s Story
It was important to tell the story of how this New Albany native rose through the ranks of the Catholic Church and became the first and only person from Indiana to reach the level of Cardinal (an international bishop of the Catholic Church). He became a national leader and pioneer by being the first leader to desegregate any schools in the nation (the Catholic schools in Indianapolis and St. Louis) and also as a consultant on desegregation to public school systems when it became a federal law years later. Some of his friends at that time included Supreme Court Justice Sherman Minton (also from New Albany) and the junior Senator from Missouri, Harry Truman, who we believe later as president consulted with the Cardinal about desegregating the armed forces. Cardinal Ritter also became a true world leader in the Catholic Church with his influence in many of the significant changes made at the Vatican II conference.

4) Create an Independent Board of Directors
As part of Cardinal Ritter’s commitment to reaching out to all faiths the founders decided to remain a local independent board, one not affiliated with any church or organization, to keep the board and house open to all.

All of these early decisions by the Cardinal Ritter Birthplace 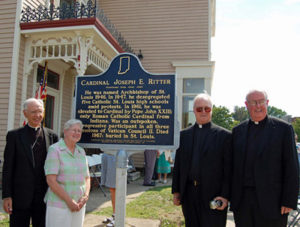 Foundation Inc Board of Directors have been accomplished. The first hurdle, renovation of the main house and storefront, was completed by 2007. On July 22, a dedication ceremony for the Cardinal Ritter Birthplace state historical marker was held. In the photo, those attending were (L to R) Bishop Robert J. Hermann, auxiliary bishop of the Archdiocese of St Louis, Virginia Lipps (niece of the late cardinal Ritter), Monsignor Nicholas A. Schneider, author of the biography “Joseph Elmer Cardinal Ritter, His Life and Times,” and Monsignor Joseph F. Schaedel, vicar general for the Archdiocese of Indianapolis.