1917 – Ordained a priest on May 30. Celebrated first Mass at St. Mary of the Annunciation Catholic Church, his home parish in New Albany, Indiana, on May 31.

1917 – Assigned on July 7 to St. Patrick’s Church in Indianapolis as Curate. On October 12 assigned to Saints Peter and Paul Cathedral as assistant to Bishop Chartrand. 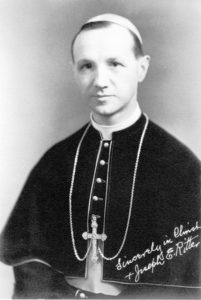 1933 – Appointed auxiliary bishop of the Diocese of Indianapolis on March 28, and took his baptismal name Joseph.

1934 – Installed as Bishop of Indianapolis (youngest in America) on March 24.

1937 – Ordered the school integration of three academies for girls in the diocese.

1938 – Faced with protests by the Ku Klux Klan in front of Cathedral rectory in opposition to racial integration.

1942 – Ordered integration of the Catholic schools in Evansville. Instructed all students to wear uniforms to avoid economic distinctions.

1943 – Integrated all schools within the Catholic Dioceses of Indianapolis.

1944 – Installed as first archbishop (youngest in America) when Indianapolis was elevated to an Archdiocese on December 19. 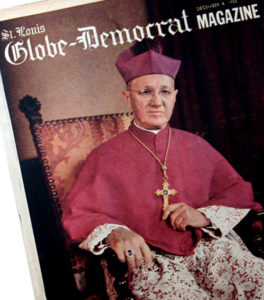 1947 – Allowed students from St. Joseph High School for black students to join students from all other high schools at graduation ceremonies held in the St. Louis Cathedral. Instructed all pastors in St. Louis to end segregation, resulting in numerous Catholic student transfers to segregated public schools.

1947 – Wrote letter on September 21, recommending excommunication for Catholics who do not obey the decree for inclusion of all students.

1952 – Assisted immigrants resettling to the U.S. after World War II and from Cuba.

1956 – Purchased and converted old DeSoto Hotel to the Hotel Alverne as a home for elderly men and women of low socio-economic means.

1960 – Notified by personal letter on December 14 from Pope John XXIII of his impending elevation to the College of Cardinals.

1961 – Bestowed the Red Hat on January 18. First American given the honor of thanking the Pope as speaker of the group.

1961 – Honored by family, friends, and Knights of Columbus at a special Mass and reception celebrating elevation to the College of Cardinals, at St. Mary’s Catholic Church in New Albany, IN.

1963 – Attended Vatican Council II: Session Two on November 18. Advocated for religious liberty, ecumenism, and the use of English in liturgy. First to speak on the topic in Rome, but had already discussed with American bishops and represented their voice and his own.

1964 – Formed the Archdiocesan Commission on Ecumenism on March 19.

1964 – Attended Vatican Council II: Session Three on September 14. Advocated for a relationship with the Jewish people; for ecumenism and religious liberty; for broad acceptance and recognition of lay people; for missionary work; for Catholic education to include scientific inquiry and students of all religions; and for mixed marriages of religions.

1964 – Spoke at a major session of the Episcopalian Convention in October. 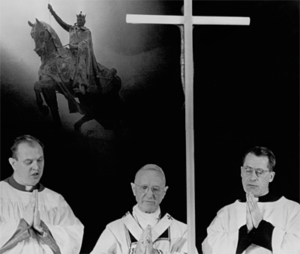 1964 – Introduced Mass in English in the USA on November 29, the first Sunday of Advent.

1965 – Sent three sermons on ecumenism to be preached in each parish. Wrote article for World Council of Churches on ecumenism.

1965 – Gave commencement address at Eden Seminary entitled “The Seminary in an Ecumenical Age.” Stood strong against negative backlash and encouraged others to speak on behalf of fostering an ecumenical spirit.

1965 – The Declaration on Religious Liberty was accepted on September 22 and confirmed by the Pope and bishops on December 7 as one of sixteen documents of Vatican Council II. The document declared Religious Freedom a right of mankind.

1967 – Celebration on June 1 to honor his 50th Ordination Anniversary with friends from St. Mary Parish and St. Meinrad. 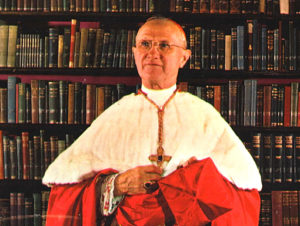