Dedication of the Cardinal Ritter Birthplace historical mark occurred on July 22, 2007. Bishop Robert J. Hermann of the Archdiocese of St. Louis, and Monsignor Joseph Schaedel, representing the Archdiocese of Indianapolis conducted the dedication. Bishop Hermann represented the city Ritter called home from October 1946 to his death in 1967. Monsignor Schaedel represented the city Ritter served as priest, Bishop and Archbishop from July 1917 until September 1946. 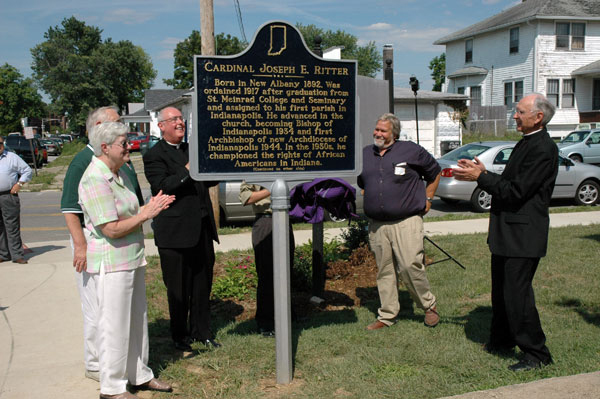 Helping unveil this state historical marker on July 22 in front of the birthplace of Cardinal Joseph Elmer Ritter at 1218 E. Oak St. in New Albany are, from left, Holy Family parishioners Virginia and Paul Lipps of New Albany; Msgr. Joseph F. Schaedel, vicar general; David Hock, a member of Our Lady of Perpetual Help Parish in New Albany and chairman of the Cardinal Ritter Birthplace Foundation; and Bishop Robert J. Hermann, auxiliary bishop of St. Louis. Virginia Lipps is the niece of the late cardinal, who was the archbishop of Indianapolis and later of St. Louis. (Photo for The Criterion by Mary Ann Wyand).

The Cardinal Ritter Birthplace Foundation, Inc. was pleased with the community recognition the Historical Marker gave the Ritter birthplace project. The restored facility has become a lighthouse of possibility within the mid-town neighborhood that had long been in need of repair. Since the restoration was completed many other improvements have been made to the neighborhood. Perhaps another Cardinal Ritter miracle!

In testimonials about the life and ministry of the late Cardinal Joseph Elmer Ritter, speakers praised his fine character and unwavering commitment to working for equality for all people during a July 22 dedication ceremony for the new historical marker at his birthplace.

He left behind “a living legacy,” they said, that continues to inspire people to embrace Christ’s call to serve the poor.

As archbishop of Indianapolis and later of St. Louis, Cardinal Ritter was remembered as a holy and courageous man who faced considerable opposition from the Ku Klux Klan when he desegregated Catholic schools in both archdioceses years before the landmark Supreme Court case of Brown vs. Board of Education [of Topeka, Kan.] in 1954 and the national civil rights movement championed racial equality in the 1960s.

The dedication of the historical marker in front of Cardinal Ritter’s childhood home at 1218 E. Oak St. in New Albany also commemorated the 115th anniversary of his birth there on July 20, 1892.

The marker erected by the Indiana Historical Bureau with funding from the Knights of Columbus Cardinal Ritter Council #1221 in New Albany reads:

“Born in New Albany 1892. Was ordained 1917 after graduation from St. Meinrad College and Seminary and assigned to his first parish in Indianapolis. He advanced in the church, becoming Bishop of Indianapolis 1934 and first Archbishop of new Archdiocese of Indianapolis 1944. In the 1930s, he championed the rights of African-Americans in Indiana.

“He was named Archbishop of St. Louis 1946. In 1947, he desegregated five Catholic St. Louis high schools amid protests. In 1961, he was elevated to cardinal by Pope John XXIII; only Roman Catholic Cardinal from Indiana. Was an outspoken, progressive participant in all three [actually four] sessions of Vatican Council II. Died 1967; buried in St. Louis.”

The marker’s text will be posted on the Indiana Historical Bureau Web site, located at www.statelib.lib.in.us/www/ihb/markers, so the information is available for Internet research.

“He was a great man of prayer, a great man of faith, a great civic leader and a great lover of the poor,” Bishop Robert J. Hermann, auxiliary bishop of St. Louis, told several hundred people attending the dedication ceremony at the partially restored frame house.

“Not only was he a great Churchman, he was also a great statesman and a great leader at the Second Vatican Council,” Bishop Hermann said. “We loved him in St. Louis.”

Bishop Hermann, who was ordained to the priesthood by Cardinal Ritter in 1963, thanked the Cardinal Ritter Birthplace Foundation board members and supporters on behalf of Archbishop Raymond L. Burke and the people of the Archdiocese of St. Louis for “giving us an opportunity to carry on the legacy of Cardinal Ritter.”

Cardinal Ritter Birthplace Foundation members are trying to raise $250,000 to finish the interior repairs and build an addition for use as a large multipurpose room.

They have established an endowment and hope to raise $1 million to ensure the future of the historic house and continuation of the charitable ministries to be located there. The board set up an account with the archdiocesan Catholic Community Foundation for tax-deductible donations.

When Phase One of the restoration and renovation project is completed, board members of the nonprofit foundation expect to use the cardinal’s birthplace for a small educational museum with memorial garden as well as space for a community meeting room and social services that may include a food pantry, dental clinic and eye clinic for low-income residents.

“I commend you for the wonderful project you have undertaken,” he said, “and encourage you to continue to move forward because the legacy of Cardinal Ritter must live on. We hope we can continue to work together in making this foundation really come alive.”

“We heard about his championing civil rights and social justice,” Msgr. Schaedel said. “… The living legacy of Cardinal Ritter will continue in this neighborhood. This is an important project and it means more than just restoring this house. It’s going to mean a lot to this neighborhood and this city for generations to come.”

The Ritter Bakery, built during the late1870s, and attached house, constructed in the 1890s, were badly deteriorated and scheduled for demolition when Historic Landmarks Foundation of Indiana bought the property in 2002.

The Cardinal Ritter Birthplace Foundation was established in 2004, purchased the house from Historic Landmarks in 2005 and is now leading the effort to complete the building.

Cardinal Ritter’s niece, Virginia Lipps, and her husband, Paul, are members of Holy Family Parish in New Albany and represented the Ritter family at the ceremony.

“I think it’s wonderful the house was saved,” she said. “My grandfather and my father were bakers, but when the Depression came along my father left the bakery. My mother and father lived in the house, but moved before I was born.”

Greg Sekula, director of the southern regional office of Historic Landmarks Foundation of Indiana in Jeffersonville, served as the master of ceremonies.

“What is so exciting about this building is its ability to hopefully transform this neighborhood and honor the legacy of Cardinal Ritter,” Sekula said. “We hope to find tenants to provide social service outreach to the community so it’s a wonderful melding of community development and historic preservation, and a great way to celebrate what Cardinal Ritter was all about.”

David Hock, a member of Our Lady of Perpetual Help Parish in New Albany, is the chairman of the foundation board.

He has worked with a childhood friend from St. Mary Parish, Bishop William E. Lori of Bridgeport, Conn., as well as retired Father Clifford Vogelsang, former pastor of St. Augustine Parish in Jeffersonville and former dean of the New Albany Deanery, to raise funds to complete the repairs and establish the endowment.

“Bishop Lori has coached our [foundation] group all along,” Hock said. “Archbishop Buechlein and Msgr. Schaedel have given us their blessing.”

Now Father Troy ministers as program director for Mount St. Francis Retreat Center and serves on the foundation board.

“This [project] is a one-of-a-kind opportunity for this city and the archdiocese to celebrate the life of one of the greatest Americans in our history,” Father Troy said. “There are three important men in my life—Jesus Christ, Francis of Assisi and Cardinal Joseph Ritter. … I love to hear people talk about the civil rights movement, … but [the work of] Cardinal Ritter is always left out. I want everybody to know about that and celebrate it.”