In early 2015 the Board of Directors envisioned some type of statue or figure of the Cardinal be placed in the Ritter Rose Garden then under construction adjacent to the Museum room. With that “seed” planted, the idea of a major bronze sculpture began to sprout. The scope of the project soon outgrew the small rose garden and exploded into a full-scale life-size quintet of bronze figures to be cast and positioned on our open lawn facing Thirteenth Street.

See Sculptor’s Conceptual Approach (link below) for the artist’s description of this visually elegant representation of Cardinal Ritter’s impact on American culture.

It is our hope that this public art piece will become a showpiece to the community while honoring the life and works of Joseph Cardinal Ritter, the only Roman Catholic Cardinal born in the state of Indiana.

Widely recognized local sculptor Guy Tedesco has been commissioned to help fulfill our dream. He immediately went to work on a bust of the Cardinal.  At the 2017 Lecture and Irish Coffee event, the artist unveiled a bonded bronze head and shoulders representation of Cardinal Ritter. 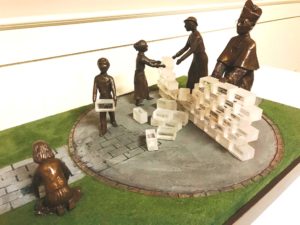 Two years of discussions and creative exploration by the committee and the sculptor followed. Tedesco enthusiastically embraced our request for a active representation of the Cardinal; being quite comfortable with creating figures in a story-telling manor, he soon conceived a way of representing the Cardinal’s signature career accomplishment, that of integrating the Catholic schools in both the Archdiocese of Indianapolis and St. Louis.

A concept maquette (small scale model) was unveiled by Guy Tedesco at the March 14, 2019 Lecture and Irish Coffee event.

The goal for 2020 is to organize a funding strategy. When sufficient funds are in hand, the figures will be cast in bronze and subsequently installed on the north lawn of Cardinal Ritter birthplace at 13th and Oak Streets in New Albany, Indiana.

CARDINAL RITTER MONUMENT – PROPOSAL FOR COMMUNITY INVOLVEMENT  – The artist’s plan for involving others in the creation of each figure.