IN BRIEF
The old Ritter family home and storefront at 1218 Oak Street was saved from demolition in 2002 (See FOUNDATION). Between 2004 and 2009 an enormous amount of money, time, and sweat equity produced a total revitalization. The main structure was completed in October 2008 and formally blessed and dedicated by Indianapolis Archbishop Daniel M. Buechlein. In early 2010 Louisville’s Home of the Innocents took up residency to provide outreach programs to the southern Indiana community. In April 2011, a spacious Community Resource Center was dedicated. By July 2013, New Albany native son Archbishop William Lori of Baltimore officially blessed and dedicated the Joseph Cardinal Ritter Museum Room. The Cardinal’s Rose Garden was completed two years later.

THE FULL STORY
Suffering from years of neglect and deferred maintenance, the late 19th century Ritter house and bakery was declared an “unsafe building” by the City of New Albany in 2001, and threatened with demolition. Local residents who remembered its ties to the Ritter family alerted Indiana Landmarks, who in 2002, purchased the house and enlisted community volunteers willing to restore the property. 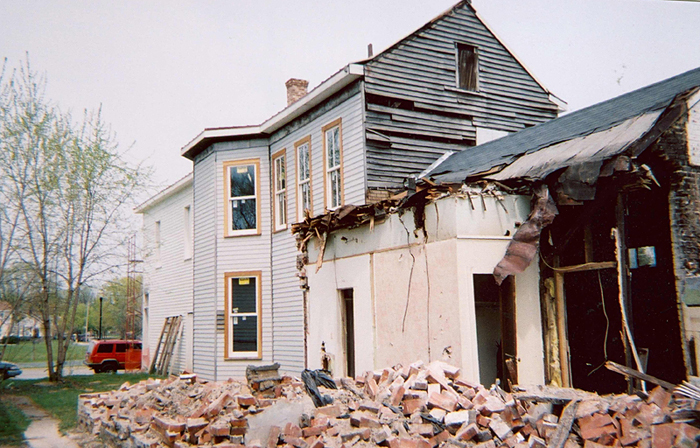 In the summer of 2002, Indiana Landmarks (a statewide non-profit historic preservation organization), through the efforts of their Southern Regional Office Director Greg Sekula, used funds from its Endangered Places Fund to purchase the house and began immediate stabilization efforts.

Trash and debris were removed from the interior; partition walls and other interior alterations were gutted; structurally unsound exterior walls were rebuilt.

The Foundation purchased the structure from Indiana Landmarks in 2005 and continues to own and manage the property for the benefit of the community. Under its leadership rehabilitation of the home was completed, a new neighborhood center was added, and the room that once held the bakery’s ovens was transformed into a small museum.

Significant grants from the Horseshoe Foundation of Floyd County, the Efroymson Fund (Central Indiana Community Foundation), the City of New Albany’s Neighborhood Stabilization Program”, and the Paul Ogle Foundation provided needed funding, along with many private donations, to complete the house and neighborhood center addition.

With stabilization work on-going, Indiana Landmarks initiated discussions with local community leaders and stakeholders to determine a vision for the Ritter house. Consensus emerged that the building should be transformed into a dynamic neighborhood center that would house social service organizations that embodied the legacy of Cardinal Ritter with his work in promoting racial equality, social justice, and religious tolerance. A community room was envisioned along with a small museum to tell the story of Cardinal Ritter. Studio Kremer Architects of Louisville, KY, and Michell Timperman Ritz Architects of New Albany, IN, provided needed professional guidance along the way to transform the house into the remarkable community asset that exists today.

In the summer of 2007, a historical marker was erected in front of the Ritter House by the Indiana Historical Bureau. Although the house was still under renovation, the marker was a message to all that the legacy of Cardinal Ritter will live long into the future. It was a gift of the Knights of Columbus Cardinal Ritter Council #1221. Eighteen months later, Archbishop Daniel M. Buechlein came from Indianapolis to formally bless the facility on October 28, 2008.

2009-2010 – In June, 2009, the Cardinal Ritter Birthplace Foundation announced its search for a major tenant, one that would fill the restored dwelling with community service organizations. On December 7, 2009, Louisville based Home of the Innocents (HOTI) announced their “search for a southern Indiana location was over”. HOTI chose the Cardinal Ritter House, through which they would offer a wide range of outreach services to the community. By Christmas time the main house was complete enough to welcome guests the CRBF staged its first Open House. Plans to build a community resource center and museum room dedicated to the Cardinal was announced. Attendees were in awe of the transformation. All agreed it was Cardinal Ritter “first miracle.”

2011 – On April 19, 2011, the spacious community resource center attached to the rear of the Ritter House, was blessed and dedicated by Bishop Paul D. Etienne (then of Cheyenne, Wyoming). Etienne formerly served as pastor of Our Lady of Perpetual Help parish in New Albany. He was a member of the CRBF Board of Trustees during these early years.

2012 – In May, the CRBF was presented the “Facelift Award” from the New Albany Historic Preservation Commission. The award recognized the Foundation for successfully overseeing the rehabilitation of the historically significant building in the heart of the Midtown section of New Albany. 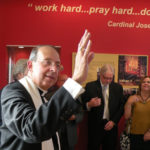 2013 – Joseph Cardinal Ritter Museum and Rose Garden was the last major structural project on the original master plan. New Albany native Archbishop William Lori of Baltimore, MD, blessed and dedicated the Museum on July 17, 2013. Following the dedication ceremony, the Archbishop, who is also the Supreme Chaplain of the Knights of Columbus, was honored by the local Cardinal Ritter Knights of Columbus Counsel #1221 at their clubhouse on Main Street. (MUSEUM ROOM)

BUT THERE IS MORE

Ritter Family Reunion:
On Saturday, July 30, 2011, more than 50 members of the Ritter family gathered from across the country at the homestead to celebrate a Ritter Family Reunion in honor of “Uncle Cardinal,” the name used by his nieces and nephews throughout the years.